Getting More out of Jupyter Notebook

One of the benefits of working in Jupyter Notebook is that you can have much more functionality and expression than when working directly in your terminal. This includes adding markdown to customize and style text outside of code blocks, adding mathematical equations with LaTeX, using hotkeys for shortcuts, and lastly using magic commands that come with IPython that yield greater efficiency for common tasks.

If you haven’t already, install Jupyter Notebook on your computer before reading the rest of the article.

Markdown was created in 2004 to allow users to create rich text using plain text which is easy to read and write. What is rich text vs plain text? The difference is that rich text is a file format that allows for formatting and styling whereas plain text contains no formatting, being made up solely of text, line breaks, and spacing.

Markdown is a great technology because you can type plain text and it will get rendered into styled text without having to click any icons, and it’ll be done programmatically. We’ll dive into the markdown syntax that you can add to markdown chunks in your notebook.

When you create a new cell, you have a few options in the drop down menu. When working with Markdown, make sure your cell is of the Markdown type, and not of the others.

There are six levels of headings available. These are useful for organizing sections in your code. You use the octothorp, also called hashtag # and add the number of them that correspond to the heading level.

You can add some styling with Strong and Emphasized text. In HTML there are the <strong> and <em> tags that denote different messages. Strong text shows strong importance for its contents, while emphasis is used to change the tone of a word or phrase as it might be emphasized in speech. Example (“I hate cilantro” vs. “I hate cilantro”).

If you want to make monospace text which is good for denoting code, use a single ` called a back tick, back quote, or left quote around the text.

You can create new lines either by including a new line in the code, or using <br> inline with text. Using *** will give you a horizontal line.

For ordered lists, use numbers followed by a period for the items like so 1.. Tabs still work for sub ordered lists.

Adding external links are just like images without the exclamation point. Here is how you do it [link text](http://url):

Adding internal sections are even easier just use [section title](#section-title):

LaTeX is useful for mathematical and scientific writing. For example, showing equations through plain text is difficult and not easily readable. LaTeX allows users to create math equations like you see in textbooks or when you write them on a chalkboard.

In the markdown cell, you can add LaTeX code between $ for inline outputs. You can also use two $$ to create its own centered paragraph in display mode. 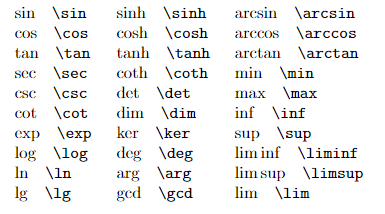 There are also magic commands that can be used to when conducting data analysis in Ipython that can be highly effective when put to use. Magic commands will help you complete commonly executed tasks in your notebook, and come in two varieties; line magics and cell magics. Line magics contain a single percent symbol % prefix and work on a single line of input. Cell magics contain a double percent sign %% prefix and work on multiple lines of input. Here are some examples of magic commands:

Displays all variables and statements on its own line

A ? before the method or variable will print the help documentation.

Suppressing output of a function with ;

For plots ending with ; will suppress output and show only the plot.

If you want to select more than one row, multicursor functionality can be accessed with alt + mouse click.

There are numerous ways to enhance your Jupyter Notebook and make it more readable and standardized. We have covered some of the methods, but there are many others that can be found in the Jupyter Notebook User’s Manual.

Getting Started Off-Platform for Data Science