Git provides us with a vast number of different commands that are listed on the documentation which can be intimidating at first. We will break down a couple that are powerful for daily tasks.

Git provides us with a vast number of different commands that are listed on the documentation which can be intimidating at first. We will break down a couple that are powerful for daily tasks.

Let’s say you’re working on experimental code on a fresh branch and realize that you forgot to add something to a previous commit in order to continue your work. In order to go to a different branch, one must always be at a clean commit point. In this case you don’t want to commit your experimental code since it’s not ready but you also don’t want to lose all the code you’ve been working on.

A good way to handle this is by using git stash, which allows you to get back to a clean commit point with a synchronized working tree, and avoid losing your local changes in the process. You’re “stashing” your local work temporarily in order to update a previous commit and later on retrieve your work.

While working on a file, you find a small bug in a separate file from a previous commit that needs to be fixed before you continue.

Running the command above will store your work temporarily for later use in a hidden directory.

At this point, you can switch branches and do work elsewhere.

Once the bug is fixed, you want to retrieve the code you were working on previously, you can “pop” the work that was stored when you used git stash.

From here, you can continue your work and commit it when ready.

Coming up we have a short video demo’ing this in action.

At this point you might be familiar with the command git log, which allows you to view the commit history of the branch you currently have checked out: 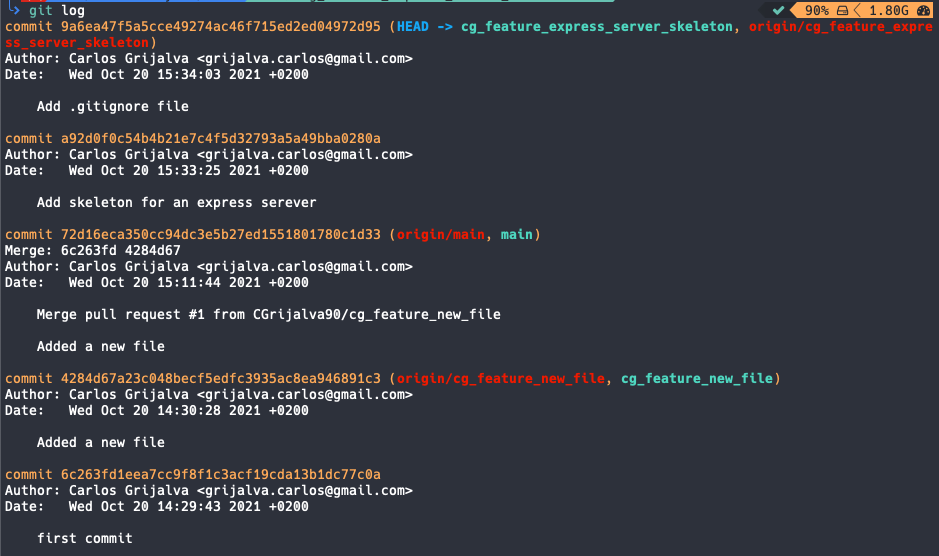 There are other ways you can use git log in order to view recorded changes. Here are a few examples:

Git’s --amend flag is extremely useful when updating a commit, it allows you to correct mistakes and edit commits easily instead of creating a completely new one.

Let’s say you finish working on a lengthy feature and everything seems to be working fine so you commit your work. Shortly after, you realize you missed a few semicolons in one of your functions. You could technically create a new commit, but ideally, you want to keep all commits specific, clean, and succinct. To avoid creating a new one, you could create your changes, stage them with git add and then type the command git commit --amend to update your previous commit.

It’s important to note that although it seems like --amend is simply updating the commit, what Git actually does is replace the whole previous commit. For this reason, when you execute the command git commit --amend, your terminal editor asks you to update your commit message:

However, if you want to keep the same commit message, you can simply add the flag --no-edit:

When grouping commands together, you can end up writing very long lines of Git commands in the terminal such as:

If you have a set of commands that you use regularly and want to save some time from typing them, you can easily set up an alias for each command using Git config.

Below are a couple of examples:

Once the aliases are configured, next time you want to check out to another branch you could type the command:

Using Git aliases can create a much more fluid and efficient workflow experience when using Git. By getting creative with your aliases, you’re able to wrap a sequence of Git commands into one in order to save time and effort.