This article is a brief introduction to the formal theory (otherwise known as Math) behind regression analysis.

What is regression analysis?

We often hear of new, complex “machine learning” methods that allow us to generate human language, very accurately predict changes in the stock market, or recognize that an image contains a person or specific object. While some of these amazing applications are results of genuinely new methodological developments, more frequently, these applications rely on the savvy use of a classic statistical technique–– regression model analysis. The first regression model was specified by Adrien-Marie Legendre, a French mathematician, in 1805, and regression-based modeling has been the cornerstone of applied statistics ever since!

Regression analysis is a group of statistical methods that estimate the relationship between a dependent variable (otherwise known as the outcome variables) and one or more independent variables (often called predictor variables). The most frequently used regression analysis is linear regression, which involves requires a scientists to find a line of “best fit” which most closely traces the data according to a certain mathematical criterion.

Regression analysis answers all these questions and more by estimating regression coefficients for every predictor variable used in a model. Let’s assume that we are analyzing a simple model that is made up of just one predictor, one outcome variable and one coefficient. This model is formally represented as follows:

In this representation, the beta values (B_0 and B_1) represent the regression coefficients. In high school, we are often taught that a line can be formally represented as follows:

Our simple regression model follows the same formula. Except, in our case the m, or slope value, is represented by B_1 and the b, or intercept value, represented by B_0. Regression analysis finds the best fit values for B_0 and B_1 and allows for us to describe the relationship between two variables using the resulting equation of the best fit line.

So how does a regression model find these beta values? In most cases, the best fit line is agreed to be the most that minimizes the residual error. A model will never perfectly fit the data, so there will always be some error, or difference between the actual observed data value and the value predicted by a model. This difference is commonly referred to as a residual, and is formally represented as follows:

A very naive approach model for data prediction would just predict that the value of a new data point will equal the average of all observed data. This model would look like the example below, where the model’s predictions are represented by a red line: 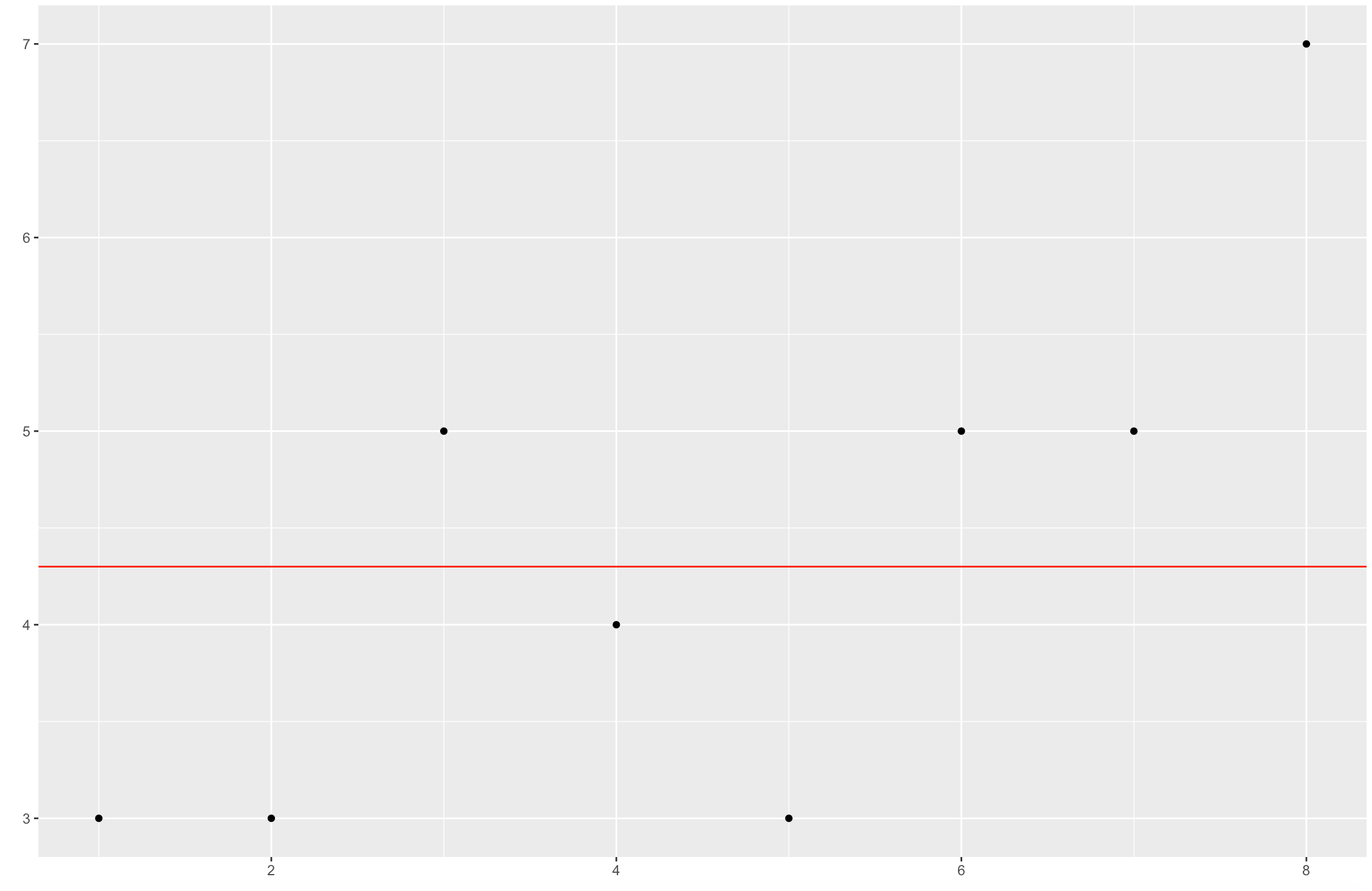 This model doesn’t seem like it fits our data very well. If we drew a line from our observed data points to the prediction line, as shown below, then added up the absolute length of all these lines, our sum of residual error would be equal to 9. Any line that has a lower sum of residual error than our naive model would be considered a better fit line. 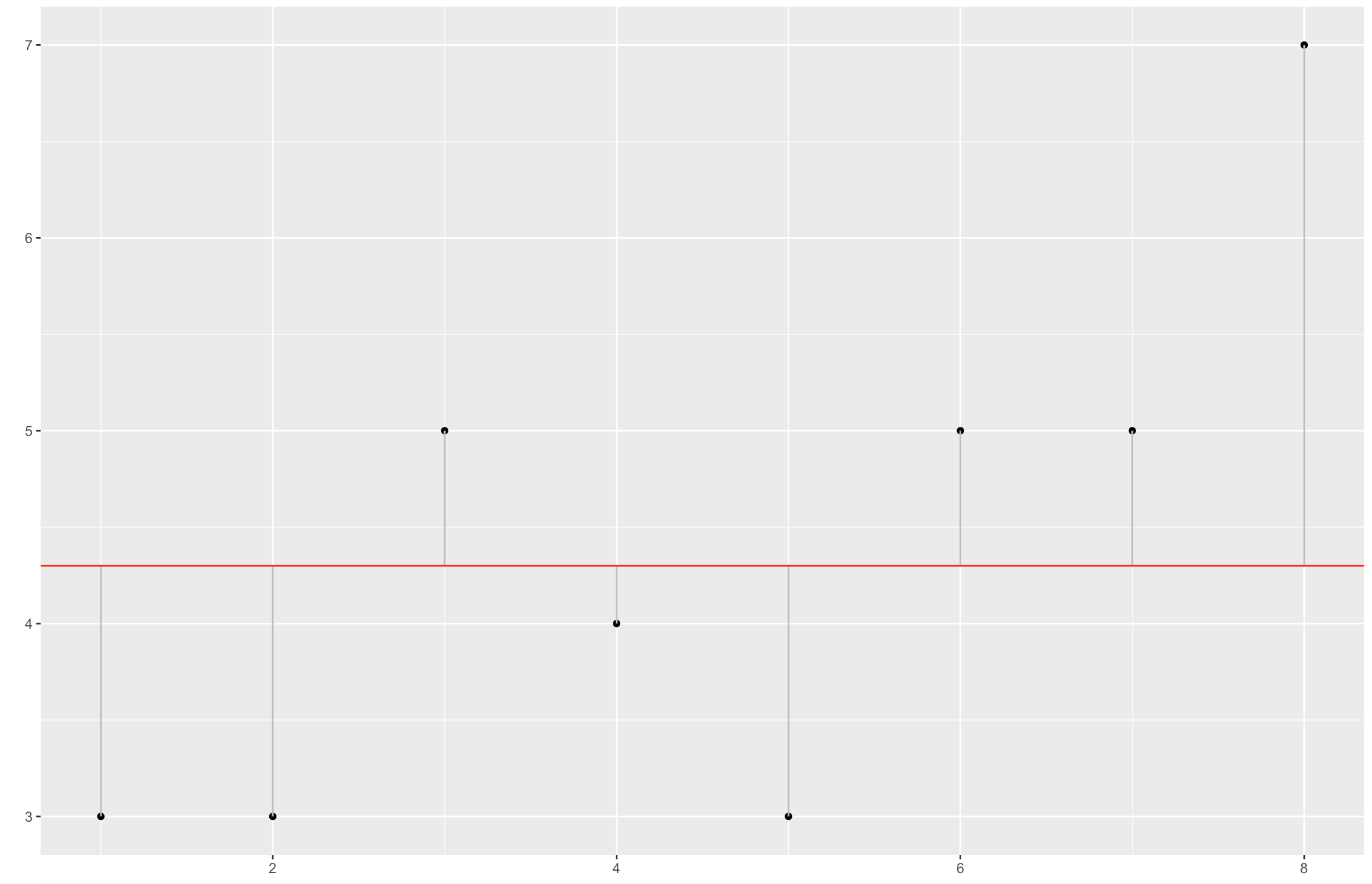 However, it is important to note that regression models use the sum of squared error (SSE); in our example above, our naive model has a SSE of 13.92. We use squared error because a prediction can either be greater than or less than the actual value, producing a positive or negative error value. We avoided this issue in our calculation above by taking the absolute difference between observed and predicted values. But, If we did not square the error values or take their absolute difference, the sum of errors could decrease because of negative error values, not because a model fits the data best. While absolute difference solves this issue, it is far more common to fit a model based on squared errors. The square function adds a greater penalty to predicted values that are very incorrect, as squaring larger values results in a respectively larger result than squaring small values, this helps bias the model fitting calculation towards a line that produces accurate predictions for all values in a dataset, rather than a handful of most common observations. The example below shows a line fit by selecting the beta coefficients that have minimized SSE to 5.38. Doesn’t that line look better? 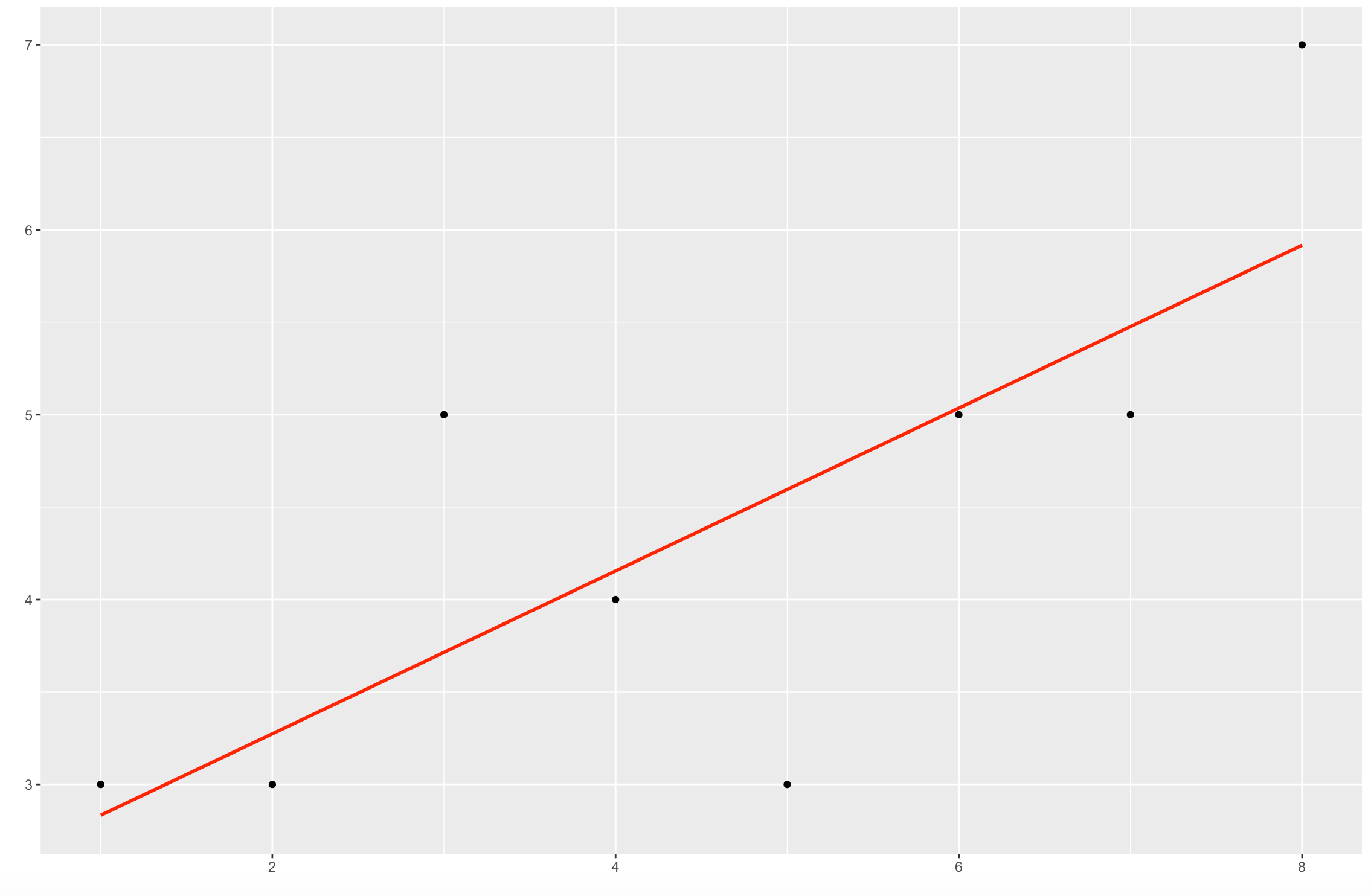 While theoretically the sum of square error gives us the best fit model given the data at hand, it doesn’t guarantee that this best model is actually a “good”, or relatively accurate, model. There are a number of statistics used to summarize model fit, but one of the most common measures is R-squared, sometimes called the coefficient of determination. R-squared quantifies the proportion of the variability in the outcome variable that can be explained by a predictor variable. More simply, it summarizes the difference between the sum of squared error for a line which is simply the average of all Y values, or outcome variables, and the sum of squared error for our proposed model. It can be formally represented as follows:

This is just the beginning of regression analysis! For the past two centuries researchers have been developing innovative approaches to regression-based analysis. By building up your theoretical and technical understanding of regression models, you too can join the ranks of statisticians utilizing the most widely and consistently applied methods to better understand our world.

Introduction To Machine Learning In R