Experience the Raspberry Pi Through the Desktop.

What is the Raspberry Pi Desktop? 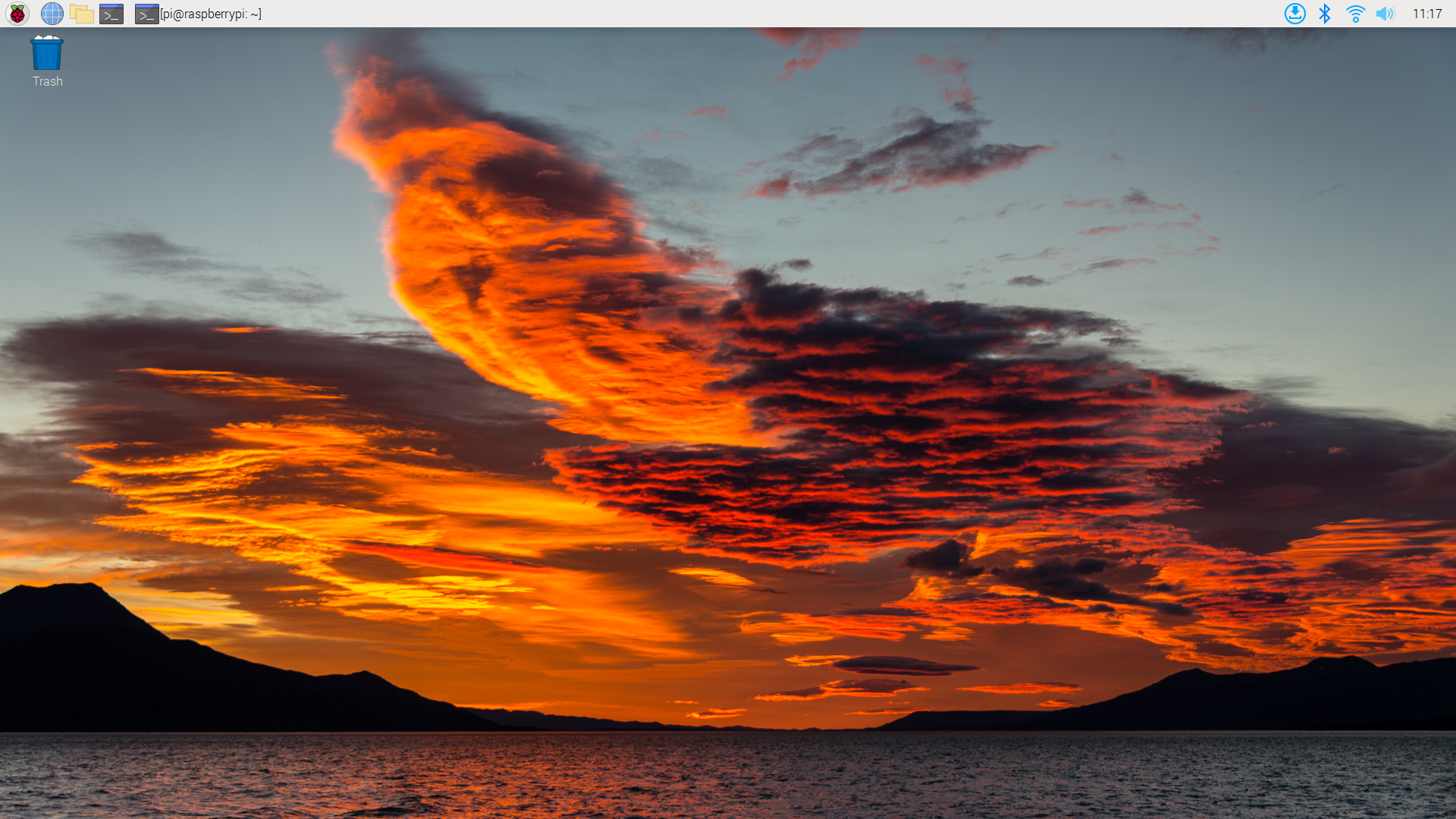 This article assumes you have one of the Raspberry Raspberry OS with Desktop versions installed. With the OS onto the micro SD card and inserted into the Raspberry Pi, we are ready to power up!

When initially booting up the Raspberry Pi, the desktop will take us through a quick setup. 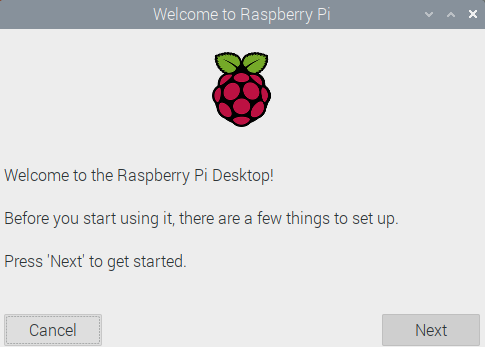 This quick setup will allow us to set the country, language, time zone, a new password, the Wi-Fi network, and we will have the option to update the software. We highly recommend changing the password since all Raspberry Pi’s come pre-configured with the same login credentials (username: pi, password: raspberry). Additionally, we recommend updating the Raspberry Pi upon boot up to ensure all of the packages are updated. 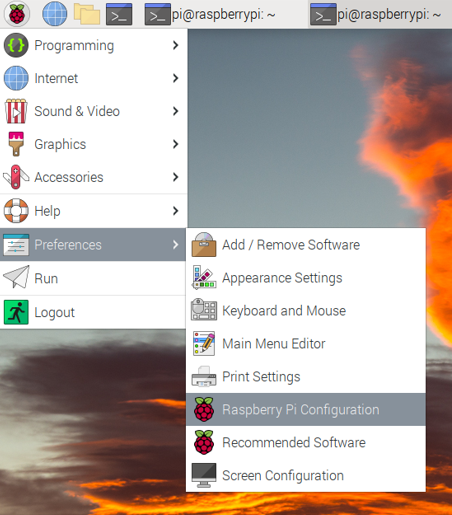 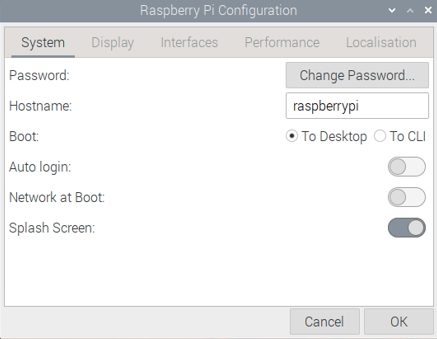 The tabs on the Configuration window are System, Display, Interfaces, Performance, and Localisation. When the System tab is selected we can change the following settings:

Another tab on the Raspberry Pi Configuration window is the Localisation tab. 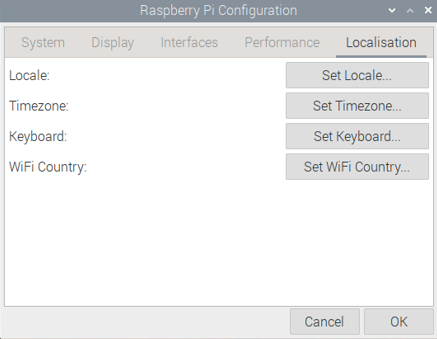 This tab allows us to change the Locale (Language, Country, and Character Set), Timezone, Keyboard, and Wi-Fi Country. It is important to set the correct Wi-Fi Country as different countries use different networking channels.

The Display tab (found in the Raspberry Pi Configuration window) can be useful if you want to change the Overscan, Pixel Doubling, Screen Blanking, or Headless Resolution settings. 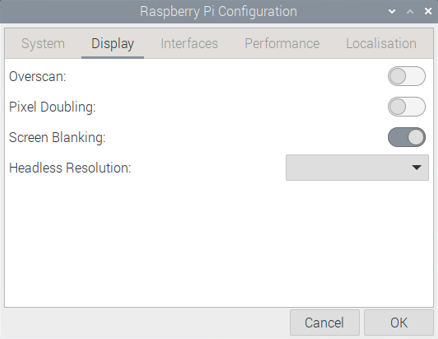 The Overscan setting places a black border around the screen when enabled. This is needed if any text or image gets cut off when reaching the end of the screen.

Connecting to the Wi-Fi

Now that we are finished with the Configuration window, we will connect our Raspberry Pi to the wireless internet. First, click the Wi-Fi icon in the top right corner of the desktop screen.

Then select the desired network and enter the “Pre Shared Key” or passphrase.

Note: An ethernet cable can also be used to connect a Raspberry Pi to the internet.

The audio on a Raspberry Pi can either output to an HDMI connection or a 3.5mm AV Jack. The HDMI output is mainly used for TV speakers or a monitor, and the AV Jack output can be used for headphones or desktop speakers.

To switch between the AV Jack output and the HDMI output, right click the sound icon in the top right corner of the screen.

Note: You must reboot the system for the new audio output to take effect.

To connect a Bluetooth device to our Raspberry Pi, we will click on the Bluetooth icon in the top right corner of the screen and select `Add Device..’. 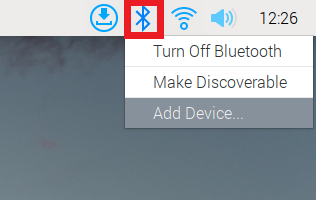 There are two code editing programs preinstalled onto your Raspberry Pi operating system: Geany and Thonny. Although Geany can be used to create files in over 50 programming languages, we recommend using Thonny to write files for the Raspberry Pi. Thonny is very user-friendly and was designed specifically for Python files.

To find these programs, click the Raspberry Pi icon in the top left corner of the screen and then select Programming.

After opening a Thonny window, click on the blue words found in the top right corner of the window that says, “Switch to regular mode”.

We must then exit out of Thonny and open it up again so the regular mode will take effect. Now that we are in regular mode, notice the fields at the top of the Thonny window. These were not offered in the simple mode.

When a Thonny window is opened, there will be a blank Python file titled <untitled>. To edit this file, enter your Python code in the white space just below the title.

To save a Python file, click the third icon from the left (floppy disk with a white down arrow).

Then select where the Python file should be saved, type the name of the file, and click OK.

To create a new Python file, click the “New” icon at the top of the screen (green plus sign).

To run the Python file within the code editor, click the “Run” icon at the top (green circle with a white triangle). If the file is not saved yet, it will first have you save the file.

The output from our Python code will appear in the Shell (white space below the Python file). We can also test our Python code by typing it directly into the Shell. If we exit out of the Shell we can pull a new shell up by selecting View (at the top) and then Shell.

Thonny has very helpful features including a variables list that can be viewed at all times.

To place the variables list on the Thonny window, click View (top of the window) and then Variables.

Thonny also has syntax error highlighting so that unclosed parenthesis and quotes are highlighted.

Code completion is another helpful tool in Thonny. After typing a letter or two in the code editor, hit tab and a list of valid elements will appear. If nothing appears then there is no valid code for what was typed.

On the top of the Thonny window is a button for debugging:

This button will then highlight the first line of code. To run each line of code continue to press the “Step Over” button (boxed in red below).

This will help us find which lines of code run properly and which ones do not.

To open a web browser in Raspberry Pi OS, click on the Raspberry Pi icon, select Internet and then choose which browser to open.

Note: You must be connected to the internet for the web browser to work.

The command line is a text interface that uses text commands to manage the computer. To open a command line in Raspberry Pi OS, click on the Raspberry Pi icon in the top left corner of the screen, select Accessories, and then Terminal. If there is a Terminal shortcut on the taskbar, then we could click this instead of using the application menu.

We also entered the command ls to view the list of folders and files within this directory. If you open the File Manager again and select the pi folder, you will see the same folders and files.

It is important to update the Raspberry Pi to ensure the newest versions of every package are being used.

First, we will open a command-line terminal and enter the following command:

This will update the list of packages on our Raspberry Pi. This is important so that new packages are available to install.

Next, we will upgrade the already installed packages to their latest versions with:

After we enter this command in the command line, the following text will appear:

Make sure to type Y and hit Enter so the Raspberry Pi can finish upgrading. 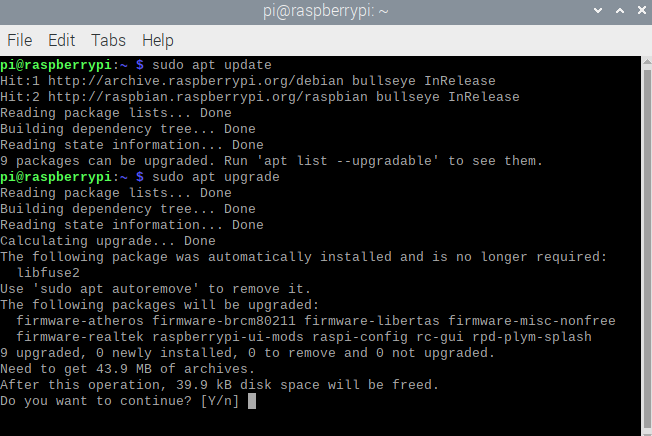 To either shutdown, reboot, or log out of the Raspberry Pi, click on the Raspberry Pi icon (top left corner of the screen) and select Logout. This window will then appear:

Now that you have the power to utilize the Raspberry Pi operating system, get busy building your tech!