Run a React Program on Your Local Computer

Great work! You’ve installed and configured Node, npm, React, ReactDOM, Babel, and Webpack. That’s all of the installation that you need!

To make these installed parts actually run, you will be using npm command-line scripts. You’ve already used some of these, such as npm init and npm install --save react.

You will find that as your applications become more complex, you will need to use more and more verbose command-line scripts. This can become a serious pain!

Inside of your package.json file, find the scripts object. This object lets you give your command-line scripts easier names, and look them up whenever you forget them!

Let’s say that you need to use the script npm run build && npm run git-commit && npm run git-push. That’s way too much to remember. In package.json, you could add:

After that, you only need to type npm run deploy, and it will execute the command saved as deploy‘s value. And even better, you can look up the command in package.json if you forget.

Inside of your root directory, create a new directory named app. Create two new files inside of app: app/index.js and app/index.html.

In app/index.html, copy the following code: 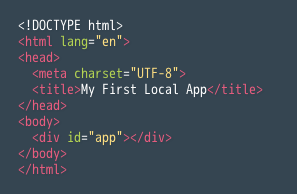 In app/index.js, copy the following code: 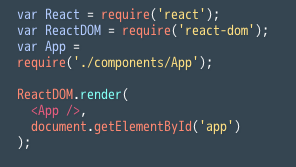 Check for a newly created build folder inside of your root directory. The build folder should contain new html and js files: build/index.html and build/transformed.js.

Open a new browser tab and navigate to http://localhost:8080. See your React component shining gloriously in the sun.

In app/components/App.js, make a change to your component class’s render function. Refresh the browser tab and see your change appear on the screen!

That seems like an enormous amount of work to get a simple app up and running!

Perhaps it was, but that was in large part due to the fact that we slowly explained every step. Executing the steps by rote is much faster.

Here’s a condensed version of how to get a React app up and running:

In the terminal, create a new directory. cd into that directory.

In your root directory, create a file named .babelrc. Write this inside:

In your root directory, create another file named webpack.config.js. Write (or copy) this inside:

Copy the code from “Run a Local React App” into app/index.js and app/index.html. Make app/components/App.js the outermost component class of your new app.

In the terminal, type these two commands: