Running JavaScript in the Browser Console

Learn how to run JavaScript code in your browser.

Along with HTML and CSS, JavaScript (JS) makes up one of the core languages in web development. JS code is normally added using the HTML <script> element for executing in web browsers, but most modern browsers also provide a console as part of their developer tools where we can directly write and run JS, typically for testing and debugging purposes. The console is essentially a REPL (Read-Evaluate-Print-Loop) that allows us to execute JS within the context of the page, such as modifying the page’s DOM (Document Object Model) or logging to the console. The console itself is also the place to view the messages that were logged by JS code, as well as any other information that the browser had documented, including network requests and security errors.

In this article, we’ll walk through how to open the developer console and run JS code right in your browser!

The steps to opening the console may be slightly different depending on the browser you use as well as your computer’s operating system. But generally, you should be able to bring up the developer tools by right clicking and selecting Inspect or Inspect Element, and then navigate to the Console tab from there. (If you are using Apple Safari, you will first need to go to your Preferences and check the “Show Develop menu in menu bar” option under the Advanced tab.) Below are some alternative ways of bringing up the console:

We’ll be using Google Chrome for the following examples — also, feel free to try to follow along with the examples! When you pull up the console, you might see some messages that have been logged by the browser, depending on what site you’re on. If you do, feel free to run clear() first to clear the console.

Remember that the console is a REPL, so we can run JS code, such as arithmetic expressions, by typing it after the > prompt and hitting Enter/Return. The expression will be evaluated, and the return value is printed to the console on the next line following the < arrow: 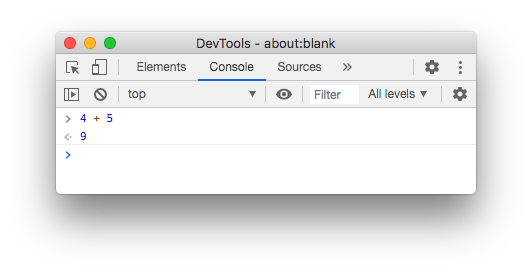 Similarly, we can use comparison operators to compare values, which will evaluate to true or false: 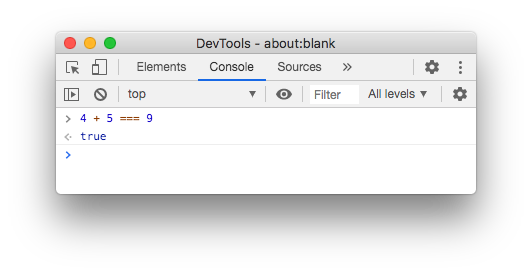 In some newer browsers, you may notice that the console displays a preview of the return value as you’re typing, even before you hit Enter/Return.

In addition to performing basic arithmetic, we can also execute any other valid JS code, such as calling functions and methods. A list of the built-in functions and objects that are available to use in the console can be found in the MDN web docs. For example, Math.sqrt() returns the square root of a number: 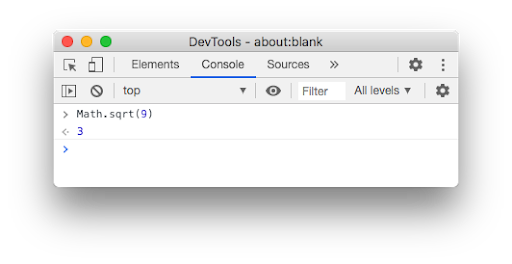 The console object can also be accessed in the web browser’s console. Most frequently, it is used to output text and data, such as for debugging purposes: 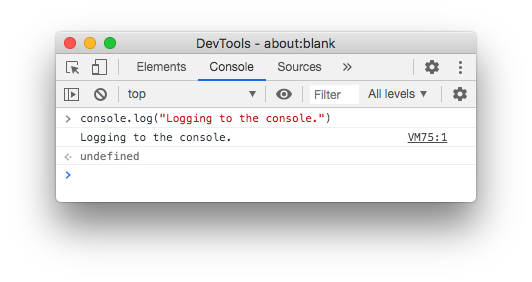 Notice that two new lines appear after running the previous code, one preceded by the < arrow and one without. This is because console.log() simply prints the message to the console and does not return anything. Thus, the first line we see is the logged message, and the second line that starts with < is the return value, or undefined.

We can also write our own functions in the console. In the example below, we define a function called addTwo() which logs a message to the console, then returns the input number plus 2: 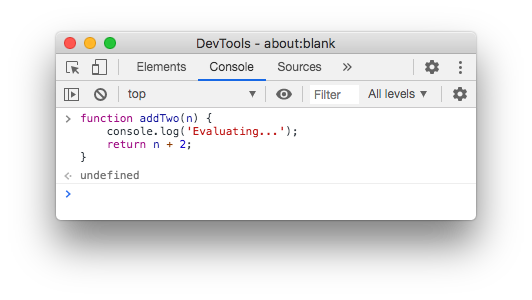 Because the function declaration itself does not evaluate to any value, undefined is returned and printed to the console after the < arrow.

When we call the addTwo() function, Evaluating... is first outputted to the console from our console.log() call. Then, the function’s return value—which is what the function call evaluates to—will get printed after the < arrow: 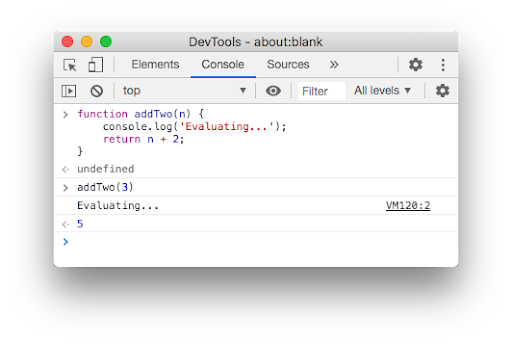 Example #3: Interacting with the page’s DOM

As we’ve seen so far, we can run JS in the console completely independent of the page we have opened in the browser. But what makes the console particularly useful is that we could also directly inspect and modify the page’s DOM if we wanted to. Let’s look at a simple example using a blank webpage.

To bring up a blank page, we can enter about:blank into the browser’s address bar. We can confirm that there is no HTML inside the <body> element of the page by checking document.body.innerHTML in the console:

We can also write JS code to modify the page’s DOM, such as adding a heading element inside the body, as seen below. Once we run the following code, the change will immediately be reflected on the page opened in the browser:

The console also recognizes $() as an alias for document.querySelector() to select an element. This shorthand resembles jQuery syntax and helps make manipulating the DOM through the console even more efficient:

In the code above, we used the shorthand $() syntax to select the <body> element and set the color property to "blue". This statement returns the value "blue" to the console, and the color change is immediately reflected on the webpage.

As we can see, the console provides a quick and convenient way of running any JS code in the browser, whether independent of or directly related to the page content. If any edits are made to the page, the changes are temporary and will be gone upon refreshing, which works great for testing purposes when you don’t want to modify the actual code. Combined with the other developer tools offered by browsers, we can see how the console can quickly become an essential part of a developer’s toolbox!