Learn how to test your code so that it can withstand changes to the codebase in the future.

Testing functions in our codebase allows us to continuously keep running our tests to ensure our functions all work the same as they did before as more functionality is added.

Testing is a methodology in software development to ensure our code works correctly now and in the future. Codebases are always expanding, and more functionality is added over time. When that happens, there can be situations in which the codebase becomes prone to failing due to missed edge cases. Testing allows us to catch these problems beforehand and cover for them in the future. It enforces the idea of writing good, robust, modular logic.

As its name suggests, unit testing assesses a unit of code — in our case, a function. A function that tests something in our codebase is called a unit test. This unit test is responsible for testing for edge cases, such as:

In the long run, test cases help us limit the number of bugs in an application.

For example, the following code creates and test a sum(x:y:) function:

In this example, testSum() acts as a unit test for the sum() function. It checks some basic cases to ensure that the sum(x:y:) function works as expected. While the example above just uses print statements, Xcode includes a more robust testing framework that makes it easy to run tests and understand when a test fails.

Let’s go over how we can set up unit tests inside an Xcode project:

Now if you take a look, you’ll notice that your project has automatically added unit tests and UI tests. The words “Tests” and “UITests” should be suffixed to your project name in the containing folders. Because the name of this project is “Testing”, it will automatically create the TestingTests and TestingUITests directories. 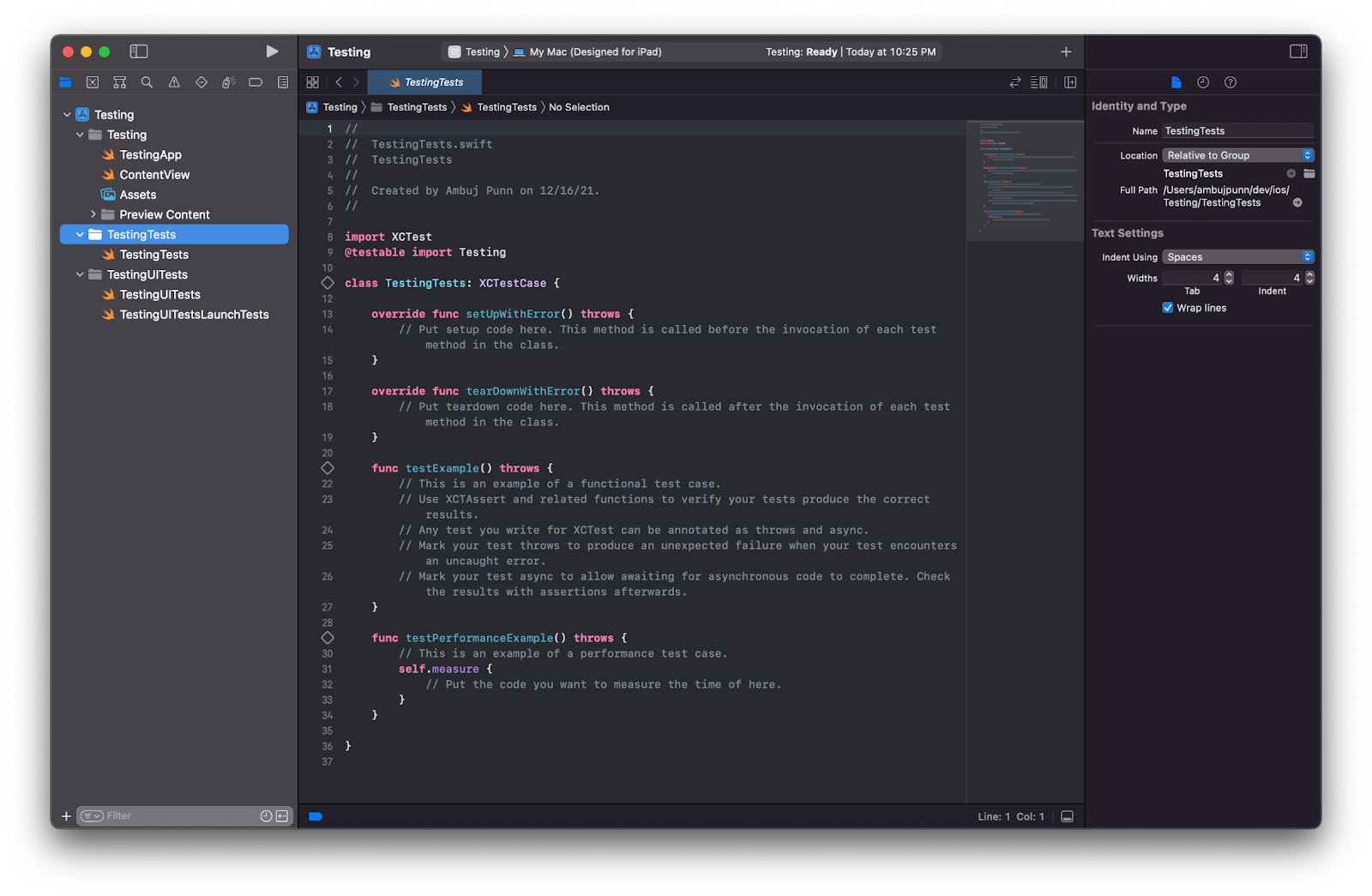 For the scope of this article, we will be focused on the unit tests which are contained in the folder TestingTests. If you open it up, you can get a glimpse of how the unit tests are structured. Now that we’re set up with unit tests in Xcode, let’s see how we can use them to test out logic.

Let’s take a quick look at the starter code that Xcode automatically generates for each test file:

Xcode provides us with the XCTest framework that enables running tests seamlessly within our Xcode. XCTest helps us test our app’s codebase by asserting whether a statement is true or not. Looking at the testSum() example from above, this is how it would look using XCTest:

In this case, we use the XCTAssert() function to test whether our sum() function passes this test or not.

Testing app logic with our tests

Let’s create a simple UI that takes in 2 numbers as inputs, calculates their sum and prints it out. We’ll then test specific functionality from this view.

Go into ContentView.swift and replace the starter code with the following code:

Run the app, this is what you should see:

This code includes the sum() function we created before. Next, replace testExample() in TestingTests.swift with testSum():

Now let’s run the test. Click on the diamond on the left of the function declaration of testSum(). That should run the tests. If your `sum(x:y:) function is working correctly, your test should come back as passed with a green checkmark to signify that all the tests passed.

Click on the upper left pane of the “Test Navigator” to see more details about your test. It should be green, indicating that it has passed successfully:

Next, let’s attempt to make our test fail and pass again. Our goal should be to write unit tests that fail when the behavior of our code changes so that we can catch this and make the necessary adjustments. Refer to this post for more details.

Hit the green diamond and see what happens. The second test in this method should be highlighted in red indicating it failed with this error message being displayed in the bottom console:

Now let’s go back to what we had before in testSum() and run the test again:

The test should pass now. By making our test fail, then pass again, we can now be sure that the test is working as intended.

Many times, we’re going to have some test data we’d like to run against our code. In this case, we can choose to import a JSON file filled with some mocked data into our tests.

Let’s go over the function logic:

Note: Some other assertions we can also use:

Run the test and it should pass with green being displayed!

Testing is a key component of software development. It gives us the ability to be cognizant of our code by ensuring that it behaves as expected. Keeping a good habit of writing unit tests allows us to write modular pieces of code and ensure that they pass edge cases. As the codebase expands, unit tests limit the number of bugs that come up in the future.

XCTest allows us to assert whether methods are behaving as they’re expected to. This is a very powerful framework that seamlessly integrates with Xcode. There are many different types of assertion functions we can use to validate our function logic. Testing often with the use of XCTest makes sure our codebase is in a healthy state.

Build a Social Media iOS App with Firebase and SwiftUI