An introduction to exploring and visualizing time series data with Python.

Data represented in a single point in time is known as cross-sectional data. As a Data Scientist or Analyst, sometimes you might encounter data that is collected over periods of time, known as time series data.

Time series data shows up in the real world quite often. For example, weather readings, company stock prices, and sales data are all examples of data that can be tracked over time. Therefore, it’s important that you are able to explore and visualize data with a time component.

In this article, you will learn how to explore time series data with Python using the following:

In a line plot, time is usually on the x-axis and the observation values are on the y-axis. Let’s show an example of this plot using a CSV file of sales data for a small business over a five-year period.

Here are the first few rows of the sales data:


Let’s create a line plot of the data, with date on the x-axis and sales on the y-axis:

Notice how we can see the trend of the data over time. Looking at the chart, it seems that:

When working with time series data, box plots can be useful to see the distribution of values grouped by time interval.

For example, let’s create a box plot for each year of sales and put them side-to-side for comparison:

For each year of the sales data, we can easily see useful information such as median sales, the highest and lowest sales, the interquartile range of our data, and any outliers.

Median sales for each year (represented by the horizontal line in each box) are quite stable, suggesting that sales are not growing over time.

We can also use a heatmap to compare observations between time intervals in time series data.

For example, let’s create a density heatmap with year on the y-axis and month on the x-axis. This can be done by invoking the heatmap() function of the sns Seaborn object:

Recall that in a heatmap, as the color gets brighter and moves from dark purple to yellow, the total sales in the corresponding cell is higher.

Here, we see once again that the sales are pretty consistent year after year and also exhibit seasonality.

We can use a lag scatter plot to explore the relationship between an observation and a lag of that observation.

In a time series, a lag is a previous observation:

In the sales dataset, we have a different sales value for each day. Therefore, the lag 1 value for any particular day is equal to the sales on the previous day. The lag 2 value is the sales two days ago, etc.

The plotting module of the pandas library has a built-in lag_plot function that plots the observation at time t on the x-axis and the lag 1 observation (t+1) on the y-axis:

How can we interpret a lag scatter plot?

Exploring the relationship between an observation and a lag of that observation is useful for helping us determine whether a dataset is random.

Since the points in the sales data move along a diagonal line from the bottom left to the top right, this indicates that our data is not random and there is a positive correlation between observations and their lag 1 values.

This can be plotted with the autocorrelation_plot() function of the pandas.plotting module: 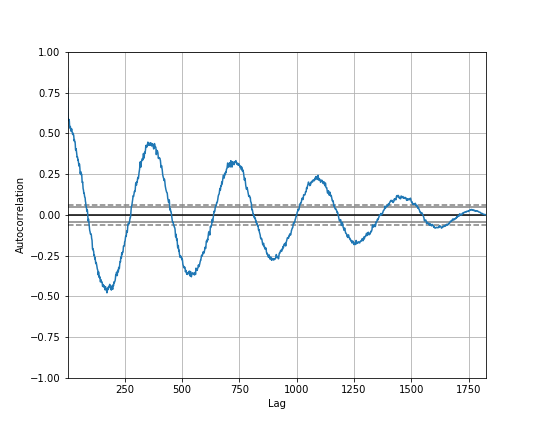 Notice how the autocorrelation plot for the sales data forms waves, oscillating between strong negative and positive correlation. These waves suggest that our dataset exhibits seasonality.

Also, notice how the autocorrelation decreases over time. This indicates that sales tend to be similar on consecutive days, but sales from three years ago are less associated with today’s sales than sales from one year ago.

In this article, you got a brief introduction to exploring and visualizing time series data using:

As a Data Scientist or Analyst, you will often work with data that changes over time. Moving forward, you are now better equipped to explore and visualize data with a time component.