Rotating an element in p5.js means rotating the canvas from its top-left corner at (0, 0). Therefore, all the elements drawn on the coordinate system rotates together with the canvas.

You can rotate the canvas using the rotate() function: 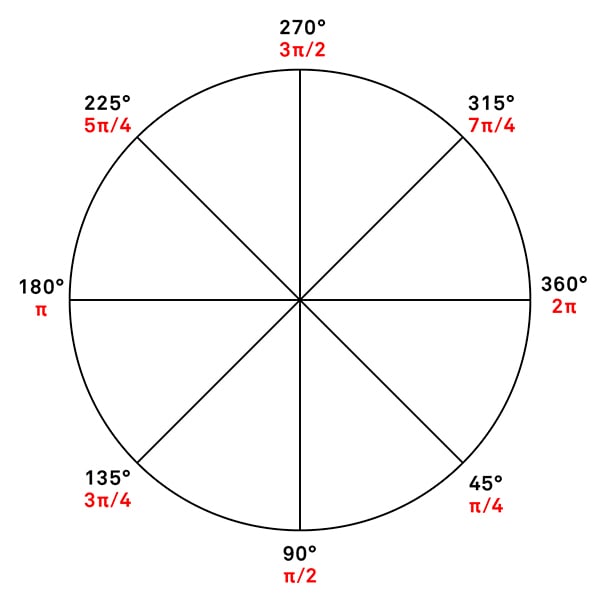 p5.js provides representations of pi (π) values, which you can use by spelling out the words like below:

The code below shows how you would pass in the PI, HALF_PI, QUARTER_PI or TWO_PI value to the rotate() function:

Alternatively, you can specify the unit of measurement of angles by calling the angleMode() function. Similar to how you set the rectMode() and ellipseMode() to change the shape’s origin, the angleMode() determines if the value inside the rotate() function is interpreted as either degrees or radians.

You can set the mode to DEGREES by writing:

You can also specify the mode to be RADIANS, but keep in mind that the default mode for angles and the rotate() function is already RADIANS.

Below the fill() function, rotate the canvas by a quarter pi (π).

Below the rotate() function you just wrote, specify the angle mode to be DEGREES.

Notice how changing the angle mode to degrees, alters the rotation amount of the elements.

Underneath the angleMode() function , rotate the ellipses’ for loop by 30 degrees.

Right above the second for loop, rotate the rectangle pattern by frameCount * 10 radians.

Be sure to use the radians() function to convert the value into radians.