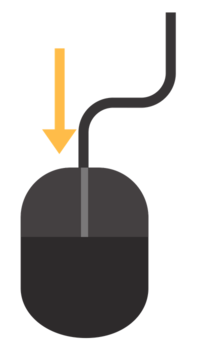 Take a look at mouseEvents.js on the right. The code shows the differences in using the mousePressed() function and the mouseIsPressed variable. Once a mouse press is detected, the mouseIsPressed variable returns true and begins drawing ellipses at random positions around the canvas for as long as the mouse is pressed. Simultaneously, the mousePressed() function randomly chooses the color of the ellipses and the background, but those colors will not change until the mouse is released and pressed again.

There are also other mouse event functions that p5.js offers, such as:

Some mouse events act in similar ways, but they can be layered to create various interactions within a p5.js project.

In the browser window notice the ellipse in the center of the canvas. Currently, it’s pretty bland—let’s make it more interesting!

Open sketch.js and add an if statement into the draw() function. It should have a condition of mouseIsPressed. Inside the code block of the if statement, set the fill value for the ellipse below to:

Note that the fillValue variable used in the if-else statement is declared at the top of the program and initialized with a value of 0 in the setup() function.

After the draw() function, create an empty mouseMoved() function. Inside the function, set the fillValue variable to a random value between 0 and 255.

Now move your mouse around the canvas to see the shape’s color change!

After the mouseMoved() function block, at the bottom of the program, create an empty mousePressed() function.

Using the shapeScale variable declared at the top of the program, double the size of the ellipse each time the mouse is clicked.

To begin, inside the empty mousePressed() function, write an if statement with a condition of:

If the statement evaluates to true, assign shapeScale to be twice its current value. Do this using a multiplication assignment operator (*=).

If the statement evaluates to false, the shapeScale variable should be reset to 50.

Now, click on the canvas and see how the ellipse’s size doubles each time the canvas is clicked. When the size of the ellipse becomes larger than the width of the canvas it is reset back to its original size of 50.