Now that you’ve tested the persistence of data, you’ll need methods to access that data.

From the previous exercise, you might recognize Dinosaur.findOne() as a static method and dino.save() as an instance method.

Sometimes you need to define additional methods for your application, like if you see a server-level error such as this: 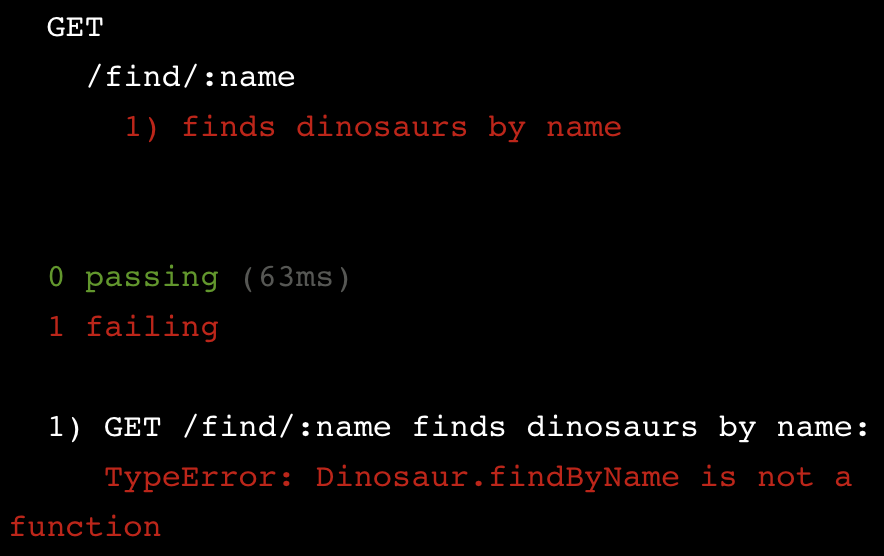 This server test is failing because there is no model method to find Dinosaurs by name. You’ll need to drop to the model layer and write more tests.

The desired query is performed on a collection of documents, so it requires a static method, which is defined in [schema].statics and called according to the example below.

Use function() notation instead of arrow => notation to properly bind this.

You can test-drive the development of this method just like any other JavaScript method: Call the method and make assertions on its output.

Test-drive the static method findByName(name), which returns the first document that matches a given name.

In dinosaur-test.js under it('returns the first match on name' (scroll to the bottom of the file) add the following setup:

Call await Dinosaur.findByName('Pterodactyl') and store the result in a variable named stored.

In dinosaur.js, add the implementation code provided in the narrative above.

Make sure to add name and callback parameters to the function.