The Bubble Sort algorithm is a simple algorithm to sort a list of N numbers in ascending order. Bubble sort works by iterating through a list and checking whether the current element is larger or smaller than the next element.

The Bubble Sort algorithm requires swapping of variables in order to sort them. The swapping algorithm is dependent on the programming language. For most languages, a temporary variable is needed to hold one of the values being swapped:

For others, the swapping can be done in a single assignment:

In the Bubble Sort algorithm, the swap function that swaps two elements in a list can be called in a Bubble Sort function to iteratively swap an element with its adjacent neighbor whose value is smaller until all the elements are sorted in ascending order.

A Python function that swaps two adjacent values in a list can be written as follows:

Merge Sort is a divide and conquer algorithm. It consists of two parts: 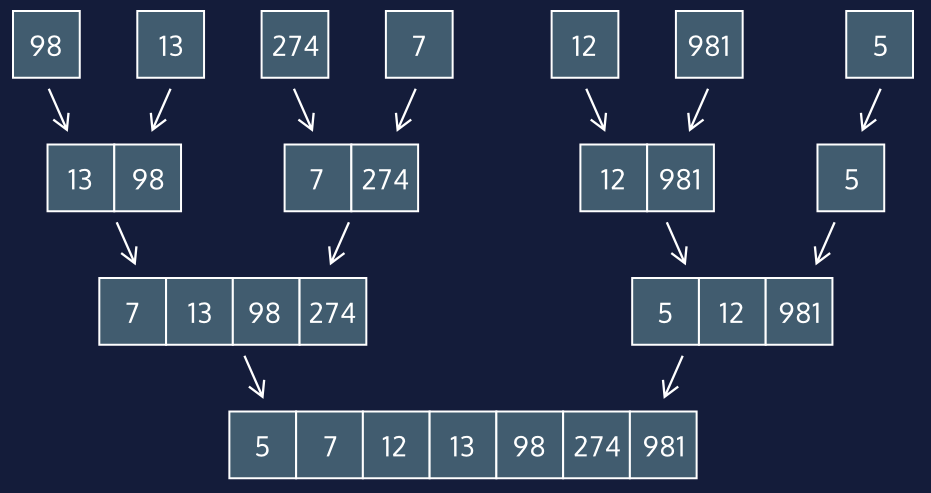 We can implement the Merge Sort algorithm in Python using two functions, merge_sort(lst), the main function and merge(left, right), a helper function.

Quicksort’s performance can be inefficient when the algorithm encounters imbalanced partitions. The worst case scenario is if the first or last element is always the partition point for an array or sub-array. In this case, one side of the partition will contain all the elements. This makes the recursive stack deeper, resulting in O(N^2) runtime.

Quicksort is a method for sorting an array by repeatedly partitioning it into sub-arrays by: