Codecademy arose at the moment of change when we first started to question the value of college degrees, only computer science majors worked in tech and learning to code meant picking up a book. That was in 2011 when tech culture was just starting to go mainstream. In 2014, 39% of American employers complained of a skills gap. In 2015, coding bootcamps saw a huge enrollment increase. Today, we’re awaiting the fifth season of Silicon Valley.

It was during this cultural pivot that Codecademy became pioneers in online education and learning to code. We led a learning revolution that pushed valuable tech skills online and made them accessible to anyone. But what’s next?

As we look back at 2017, we realize that we are, once again, in the middle of another shift. Our learners are experiencing their jobs changing amidst the primacy of technology. Automation is “threatening over 800 million jobs,” and Google released a learning to code toy for children. These facts have spurred a cultural phenomenon where we find ourselves asking the same question. If in 2010, we wondered “Can someone learn to code online?” in 2017 we ask, “Should I?”

Our 45 million learners have answered that question with a yes. But there’s more to this data point than sheer mass. Of the millions of people who used Codecademy in 2017, about 55% of them already hold university degrees. While underemployment and waitresses with PhDs aren’t new, a definitive next step is. We’re witnessing a momentous shift as professionals of all ages and demographics seek continued education. Degree-holding professionals, and even those still in school, are looking online for the skills they need to find jobs.

At Codecademy, we have a unique point of view to survey the evolving cultural landscape. As the largest vocational education platform in the world, our learners are a global reflection of the future of work, programming and learning to code. Extracted from a survey sent to a subset of our millions of learners, we asked and discovered why people are learning to code, where they look to learn new skills and the effects learning to code has on careers.

Why are people learning to code?

You might think that people are learning to code to become software engineers, but the reality is that less than half of our audience is interested in moving into a software development position.

So why learn to code? Software is eating the world and programming your job. We’re hearing increasingly from people who don’t want to become developers but do want to move into tech adjacent fields. Considering that information technology is the fastest-growing sector of the US economy, this makes sense. We’re also watching traditionally non-technical careers become technical as the entire economy digitalizes.

John Maeda, Head of Computational Design & Inclusion at Automattic, extols the benefits of designers who can code. Marketing guru Andrew Chen, argues that growth hackers, or marketers who code, are the new VPs of Marketing. In his own words, “Coding and technical chops are now an essential part of being a great marketer in Silicon Valley.” The same conversation is happening among product managers and business analysts too.

“I’d argue that rather than non-technical jobs being replaced by developers, previously non-technical jobs are being infused with technology. This results in the need for people in dozens of roles in varied industries to learn programming,” says our Head of Marketing, Prasid Pathak.

Learning to code also opens doors—specifically where there weren’t many points of entry before. We found that women are 40% more likely than men to begin coding to feel empowered and disproportionately sought out coding as a way to work remotely. This could mean women want to travel, or they have a reason to stay at home. Either way, there’s a clear indication that location flexibility is more important to women than to men and a technical education is one way to get there. 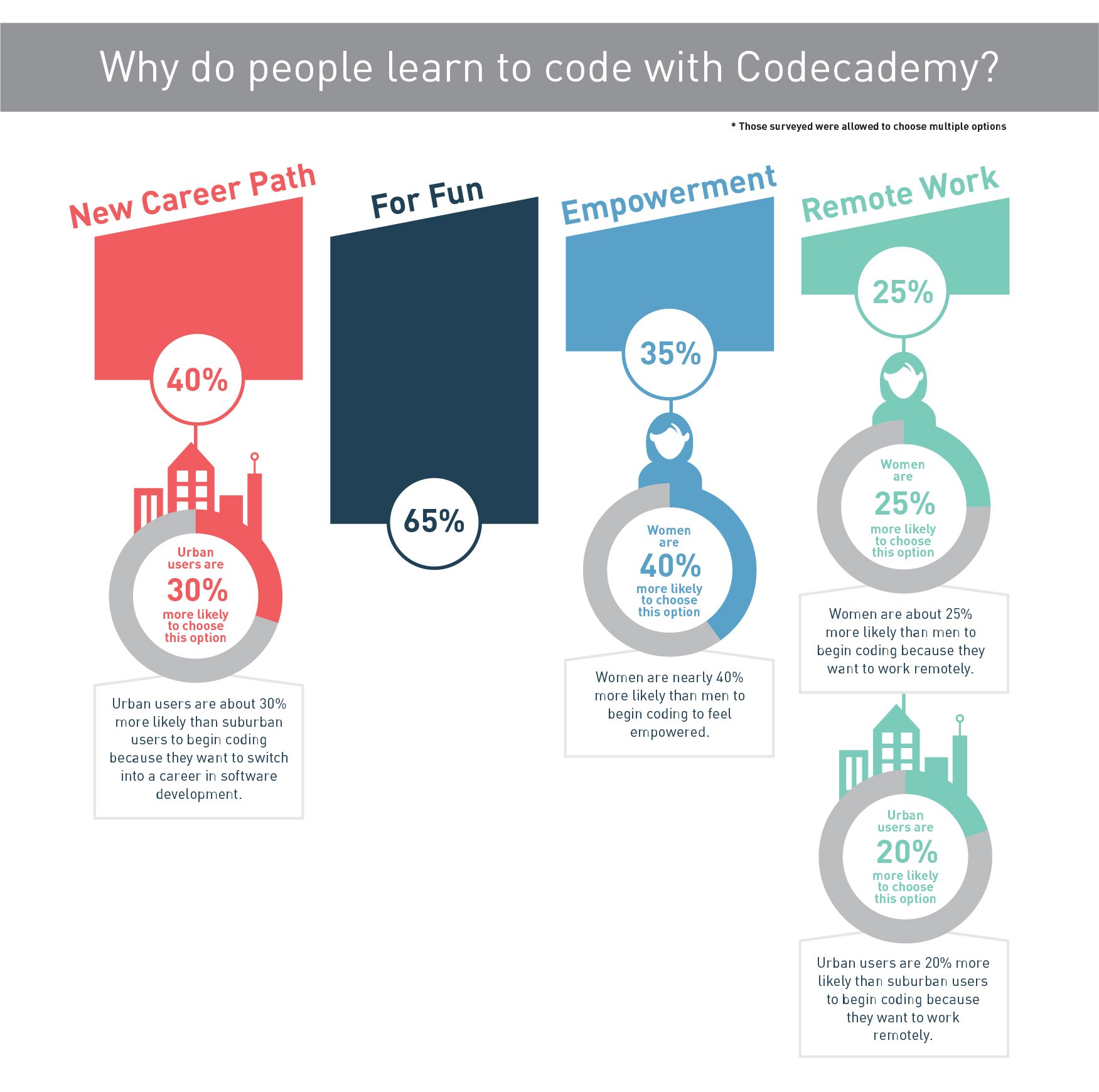 What are the most popular ways to learn to code and why?

At Codecademy, we recognize that our audience is often learning from more than one source. They might be enrolled in university courses or a coding bootcamp and rely on mentors to help them take their next career step.

Exploring this breakdown, about half of our audience has never taken a university programming course, and 35% percent of respondents are using online courses as a primary method for learning to code. This continued education isn’t going to happen on campus; it will happen at home.

That’s a good thing emotionally. Almost 25% of people who had taken a full-time university course to learn how to code chose to take an online course because it provided a safer space to learn than in-person classrooms. Additionally, only 10% of those surveyed felt happy while learning in a traditional university setting.

Learning to code online means you can work at your own pace and make mistakes without pressure from your peers or professors. Turns out, people like this environment. 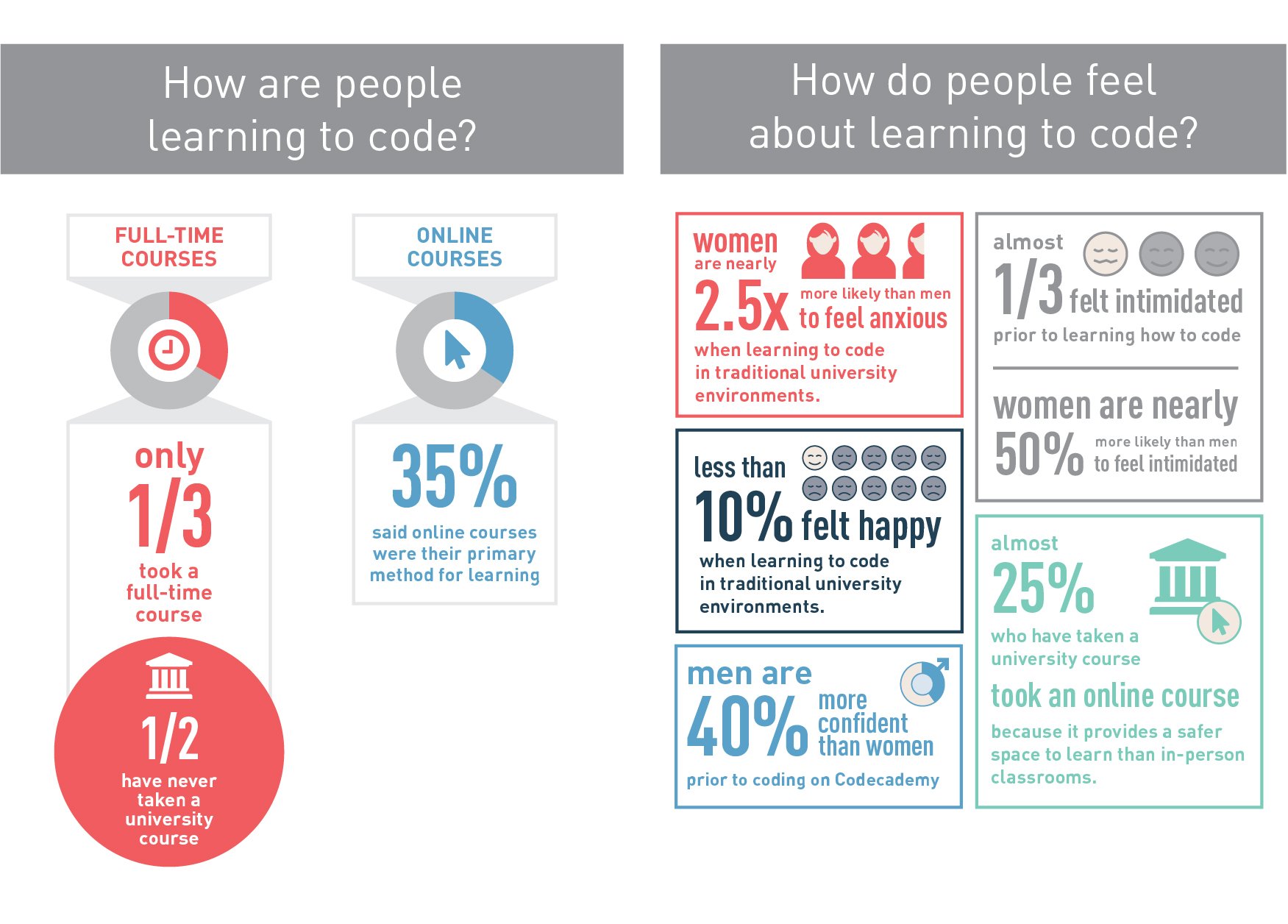 The impact of learning to code

Six years ago, we questioned whether or not university degrees were worth their cost in student debt. Today, Codecademy learners are see clear benefits from learning technical skills.

Nearly 30% of Codecademy’s users said learning to code helped them make more money in their careers. Of this audience, 99% percent have only taken our free courses. Learners who ranked the benefits of learning to code also gained more autonomy in their careers, got the job done faster, saw more respect and used programming skills to get things done that they wouldn’t be able to otherwise.

Hiring managers confirm the benefits of learning to code. Almost 65% of people who report strongly influencing hiring decisions say that they’re more likely to hire someone into a role similar to or below theirs if the candidate has coding skills.

This is particularly disheartening data. Dozens of programs have sprung up to help women move into careers in tech, but it seems that even when women learn the skills, they’re not seeing the same reward.

All data comes from a survey sent to a random subset of Codecademy users where there were 1,165 respondents. With data integrity in mind, we shared only significant findings as determined by SurveyMonkey with a standard 95% confidence level, meaning that "the difference between two groups has less than a 5% probability of occurring by chance or sampling error alone, which is often displayed as p < 0.05."

You can download data from the largest space telescope in history and analyze it using Python. 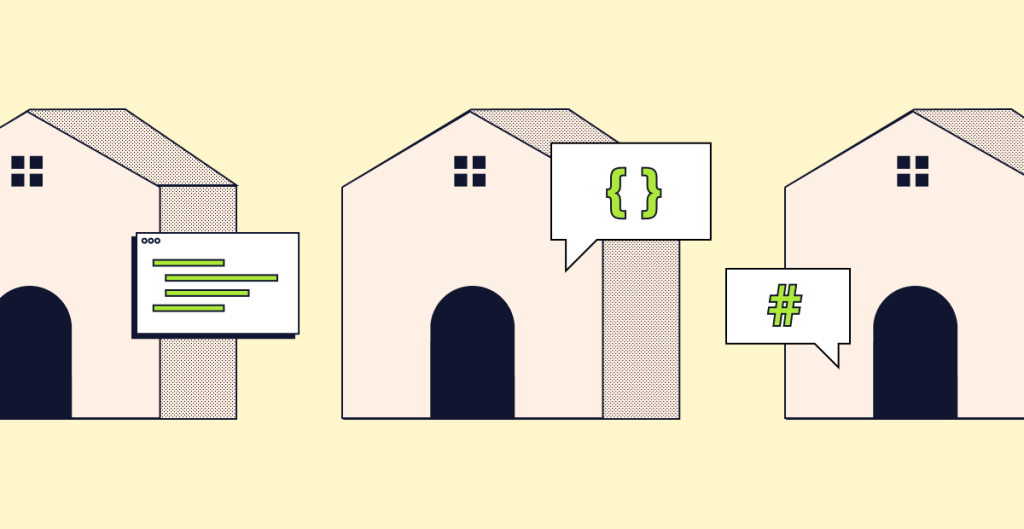